The Age of Entrepreneurship

To be sure, a number of well-known tech titans started more-or-less this way: Facebook, Google, Microsoft, Yahoo, and Hewlett-Packard, to name a few.

However, a paper published a while back by the Ewing Marion Kauffman Foundation – the group devoted to fostering entrepreneurship around the world – suggests that the age distribution among company founders is much broader than we might have imagined.

The article summarized several findings that I personally found surprising:

This last point is illustrated by the chart below. The vertical axis measures the “percentage of individuals... who do not own a business in the first survey month that start a business in the following month with fifteen or more hours worked per week.” So, for example, in 2008, about 0.26% of people in the 20-34 age range started businesses each month, compared to 0.36% of those in the 55-64 age range: 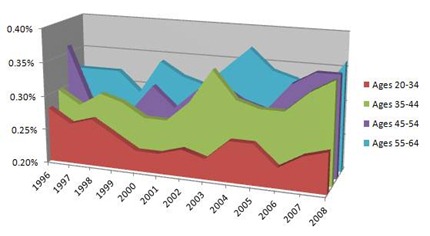 Perhaps this can be explained in part because middle-aged entrepreneurs have several real or perceived advantages over their more youthful counterparts:

So why is this important?

First of all, we all know that the age distribution in the U.S. is inching higher. Baby boomers – those born between 1946 and 1964 – are now 46 to 64 years old. These are the ages with the highest rates of company formation – the entrepreneurial sweet spot.

Second, it’s widely believed that entrepreneurship is the force that drives economic growth, prosperity, job creation, and innovation. In recent decades, most net job creation can be attributed to firms that have been around for five years or less.

If you connect these dots, it becomes clear that middle-aged entrepreneurs will play a central role in leading us out of our recession and restoring normal levels of employment. The Kauffman article concludes that “we may be about to enter a highly entrepreneurial period.”

If you’re middle-aged but have been reluctant to take the entrepreneurial plunge simply because you think you’re too old, think again. As it turns out, you’re exactly the right age to be starting a business!

Today's guest blog is by Akira Hirai, the founder of Cayenne Consulting. He has a diverse background as a Tier I management consultant, investment banker, technologist, and Silicon Valley entrepreneur. His passion today is to help entrepreneurs get their act together before they talk to investors, with a team of advisors and affiliates around the country. He blogs regularly at http://www.caycon.com/blog, and you can contact him directly through his website.