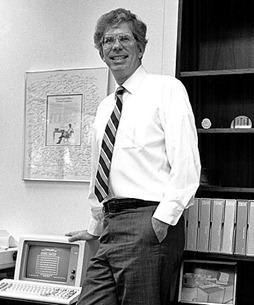 My introduction to startups really came when I first worked in IBM with Philip Donald Estridge back in 1981. Known as Don Estridge, he led development of the original IBM Personal Computer, and thus is known as "father of the IBM PC". He’s gone now, but I still remember him fondly.

He and Bill Lowe somehow managed to convince then CEO Frank Cary to give them a dozen engineers, a small budget, and a few months, to set up a small skunk-works called Entry Level Systems in Boca Raton, Florida, to develop a low-cost personal computer (code name “Acorn”). This was to compete against increasingly popular offerings from the likes of Apple Computer, Commodore International, and Radio Shack.

He was an engineer, so his first act was to buy one of each of these computers, and disassemble them in his office (a practice frowned on in IBM at the time – due to lawsuits). He then brought in the engineers and challenged them to do better in each of the functional areas, or find a cheaper solution with parts off the shelf. That was pure Don Estridge – always challenging the team to push beyond their comfort zone.

IBM had traditionally done all its own vertical technology development, so this outside vendor thing broke all the rules. He went to vendors for common hardware parts, went to outside software developers for the operating system and application software, and acted as an independent business unit. This caused great consternation within IBM at the time, but ultimately set the standard against which all IBM technology had to compete.

These changes enabled his team to develop and announce the IBM PC in 12 months -- at that time faster than any other hardware product in IBM's history. Estridge also then published the specifications of the IBM PC, allowing a booming third-party aftermarket hardware business to take advantage of the machine's expansion card slots.

The startup process and the importance of founders with a vision and energy hasn’t changed much in the last 30 years, but the technology has improved by orders of magnitude. Here are a few PC-related examples:

As with many successful entrepreneurs, Don Estridge was a humble man, who was actually embarrassed by the size of his office, as his stature and rank grew in IBM. It is said that Steve Jobs offered Estridge a multi-million dollar job as president of Apple Computers, which he turned down. He had an excellent relationship with Bill Gates, who probably extended him a similar opportunity, but Don was too proud of his IBM heritage.

His leadership dramatically changed both IBM and the computer industry, resulting in a vast increase in the number of personal computers sold and bought, thus creating an entire industry of hardware manufacturers of IBM PCs. He immediately was asked by top executives to apply that leadership to the mainstream business of IBM mainframes.

Unfortunately, before very long he was killed in the tragic crash of Delta 191 at DFW airport (wind shear), along with his wife, Mary Ann, on August 2, 1985, so we will never know what additional legacies he might have left.

But like every true leader, he left a great legacy with everyone he worked with, a conviction that anything is possible in business if you believe in it and work hard. He was a role model we can all aspire to, and rare true entrepreneur.