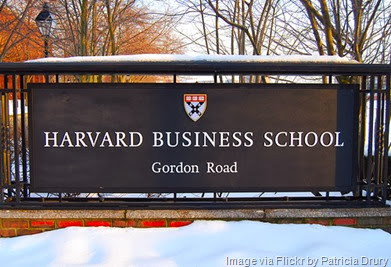 I don’t have an MBA. I used to fear that this would put me at a disadvantage in starting my own company, but now I’m convinced that it may be the other way around. In some reputable surveys, as many as two-thirds of entrepreneurs felt that their entrepreneurial spirit was more ingrained than learned, so a specific education level is at least irrelevant.

For business professionals who aspire to an executive position in a large company, most people agree that an MBA is always positive. It will get you a higher starting salary, and a valuable edge in your credentials at every promotion opportunity. In fact, BusinessWeek reports that roughly 40 percent of the S&P 500 chief executives have MBAs in any given year.

On the other hand, I had trouble thinking of famous entrepreneurs with an MBA. With a little research I found a few notable names in relatively recent businesses, although each of these actually started with some big-company experience:

These probably feel that their MBA was worthwhile. But I’ve found so many on the other side, like Mark Zuckerberg of Facebook and Steve Jobs, who dropped out of college to start companies, and succeeded anyway. So here's my net on how an entrepreneur should look at an MBA:

What’s different about the entrepreneurial environment? Many people argue that it has to do with the requirement for entrepreneurs to use “effectual” reasoning, compared to “causal” reasoning taught by most of the major business schools.

According to Professor Saras Sarasvathy, who teaches entrepreneurship at the Darden Graduate School of Business, causal reasoning begins with a pre-determined goal and a given means, and seeks to identify the optimal way to get there. Effectual reasoning, on the other hand, begins with a given means and allows goals to emerge based on situational dynamics.

That’s all a bit academic, so for me an MBA is not gold. But I have to admit that I feel blessed when I’m invited to guest lecture at MBA classes at one of the local universities. As in all my articles, I always hope to add a dose of reality to the theory, and make some gold for entrepreneurs and executives alike. But I’m always open to learning from you as well.